The Paramount Chief of the Aflao Traditional Area in the Volta Region, Togbuiga Amenya Fiti V, has testified about how Bishop Charles Agyinasare prayed for the rains to stop in Aflao during one of his crusades in the area some years ago. 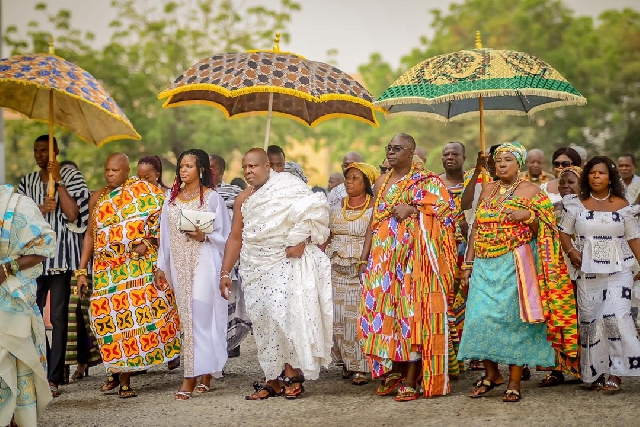 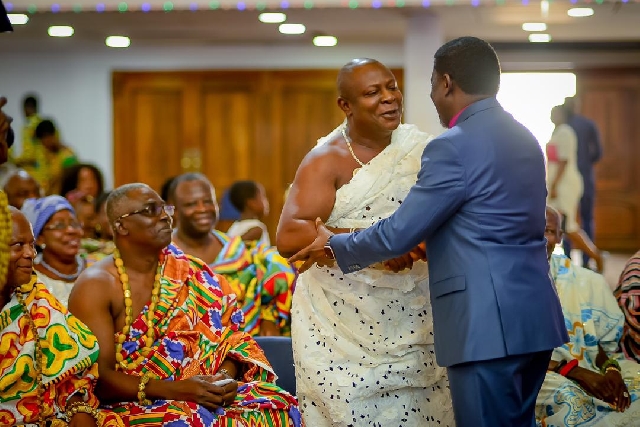 Worshipping at the Perez Dome, Dzorwulu, Accra, with a whole contingent of traditional leaders on Sunday, 26 January 20120, Togbuiga Amenya Fiti V said it was “a great honour for me and a great blessing to be here on the altar of blessings and hope”. 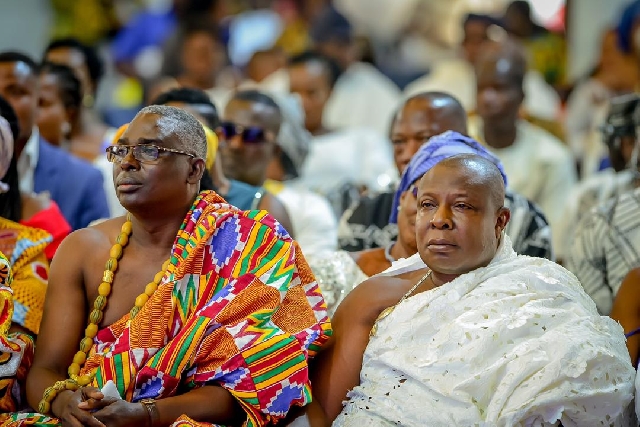 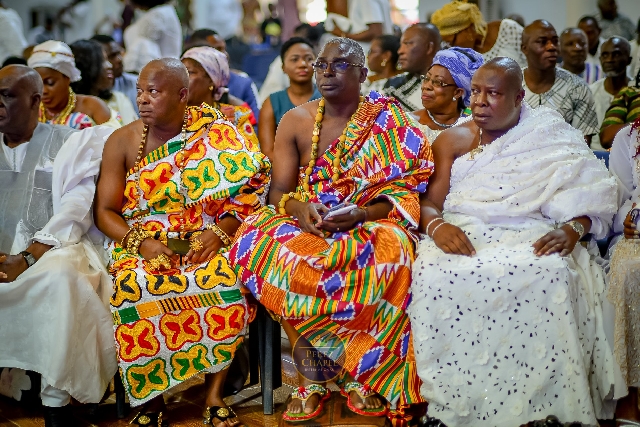 He told the congregation that Bishop Agyinasare “is my best friend, my brother and my godfather”, adding: “I have been planning to come here for many years but today, I’m here”. 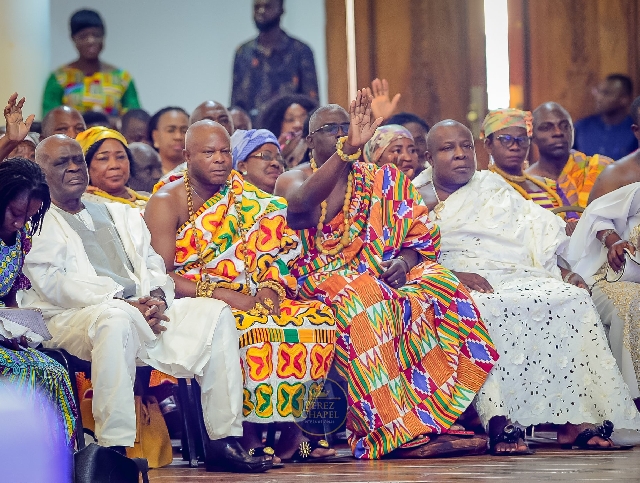 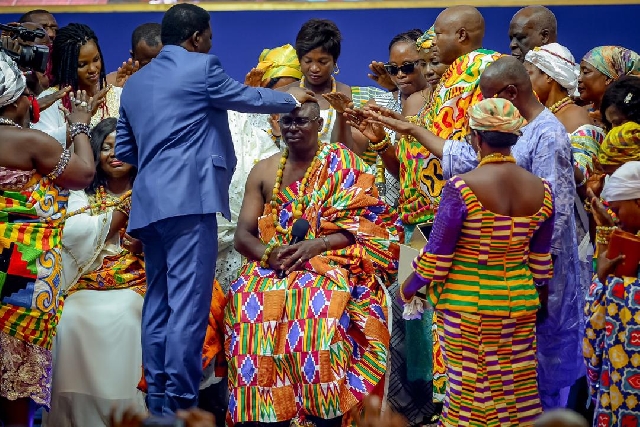 The traditional leader then testified to the glory of God about how the founder of Perez Chapel International commanded the rains to stop when the deluge began during a crusade in Aflao. 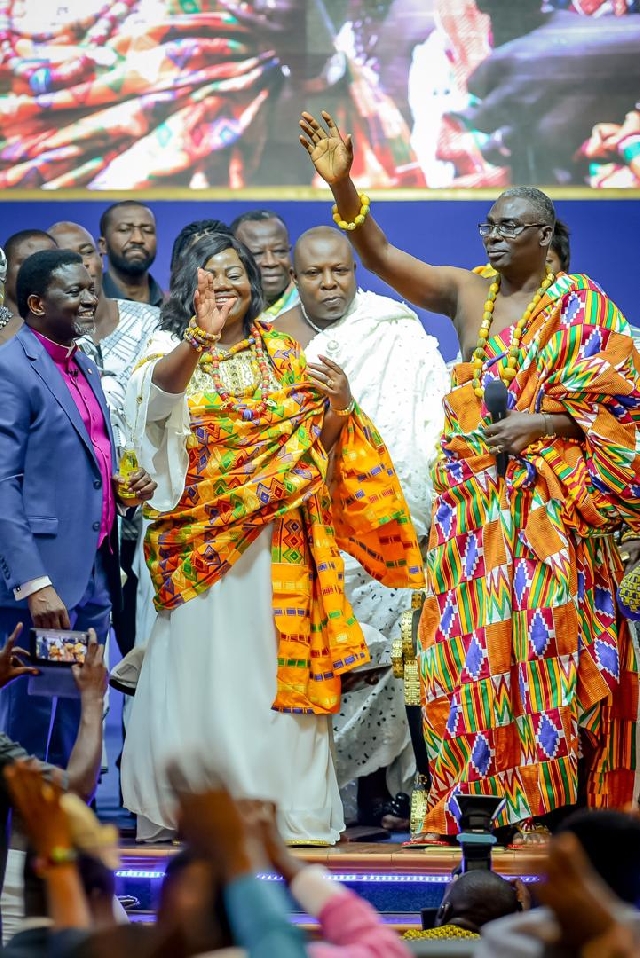 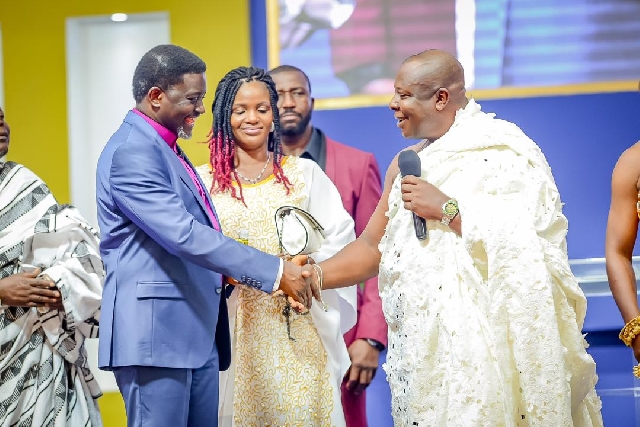 Bishop was in Aflao for a crusade – a very big crusade, indeed. He came to the palace that afternoon; actually, I was very sick and my elders informed him that according to tradition, he can’t see me. He left and he came again, demanding to see me. So, they allowed him to come in. I was in bed with drips and other things on me – he was then very young, not with a [grey beard] – and he told me: ‘Togbui, why are you in bed? You are so young to be in bed; no, you’re not sick, get up; I have a vision for you! This man told me: ‘Togbui, you have to rescue this community, I have a vision that you’ll be one of the greatest kings in Ghana’. And, today, my name is everywhere: [in] every corner of the world; not only in Ghana. I’m now the Vice-President of the Forum of Kings and Traditional Leaders of Africa. I said: ‘Why is this man telling me to remove my drips and come for a crusade, why?’ I refused to go the first day [and] the second day; the third day, I went. And the last day I went in for the final crusade, ladies and gentlemen, it is very easy to pray for the rain to fall, but to stop the rain, it is not easy. The whole community was praying for rainfall for more than eight months; there wasn’t any rainfall. And that day, that fateful night, the rain was coming and I said: ‘Hey, my friend, the rain will destroy your crusade’. Then this man stood up; he said: ‘Togbui, let me beg your people, I know they are looking for rainfall but I’m praying for God to close the gates of [heaven]. He prayed for the rain not to fall and immediately after the crusade, the rain will fall; and really, it did. It wasn’t rainfall – water [was] coming from heaven for more than four hours. So, if somebody can just command or appeal to the Almighty Father to stop the rain, [then] I’m just here to allow him to conjure some blessings on me. I’ve been looking for the opportunity to take my own rainfall, and since then, we have been communicating; he’ll call me early in the morning and pray for me, call me in the evening and pray for me. I’m a member of this congregation. So, I’m here again to thank the congregation for giving my brother that needed support for the church to grow from strength to strength. He’s not in charge, it’s the Almighty Father who is in charge. Thank you very much.

After Togbuiga’s testimony, Bishop Agyinasare anointed him with oil and prayed for long life for the President of the Aflao Traditional Council.

“Father, we commit your servant into your hands, You called him at such a time as this; like you used Solomon, use him; like you used David, use him; protect him, protect his family, give him strength, health, physical vital like never before in Jesus’ name; take authority over every spirit of premature death; until he has finished his work, let him not step out in Jesus’ name, we call it done. Amen.