There is widespread anger among incumbent Assembly Members aligned to the ruling New Patriotic Party seeking reelection in the upcoming District level elections following a decision by the Party to hold primaries for the District Level election.

The New Juaben South Constituency Executives of the ruling New Patriotic Party has instituted ‘Primaries for electoral areas where more Members of the Party have shown interest to contest as Assembly Member.

However, most of the incumbent Assembly Members who are members of the party boycotted the primaries held on October 5th and 6th, 2019 in across challenging decision by the party which they say is inconsistent with the local government act.

A memo signed by the Constituency Secretary of the Party, Isaac Adjabeng,but intercepted by Starr News states that ” At the constituency general meeting held on the Sunday 15th September,2019, a decision was taken to elect candidates for the assembly elections ar Electoral Areas where we have more than one party faithful’s who had shown interest to Contest.” 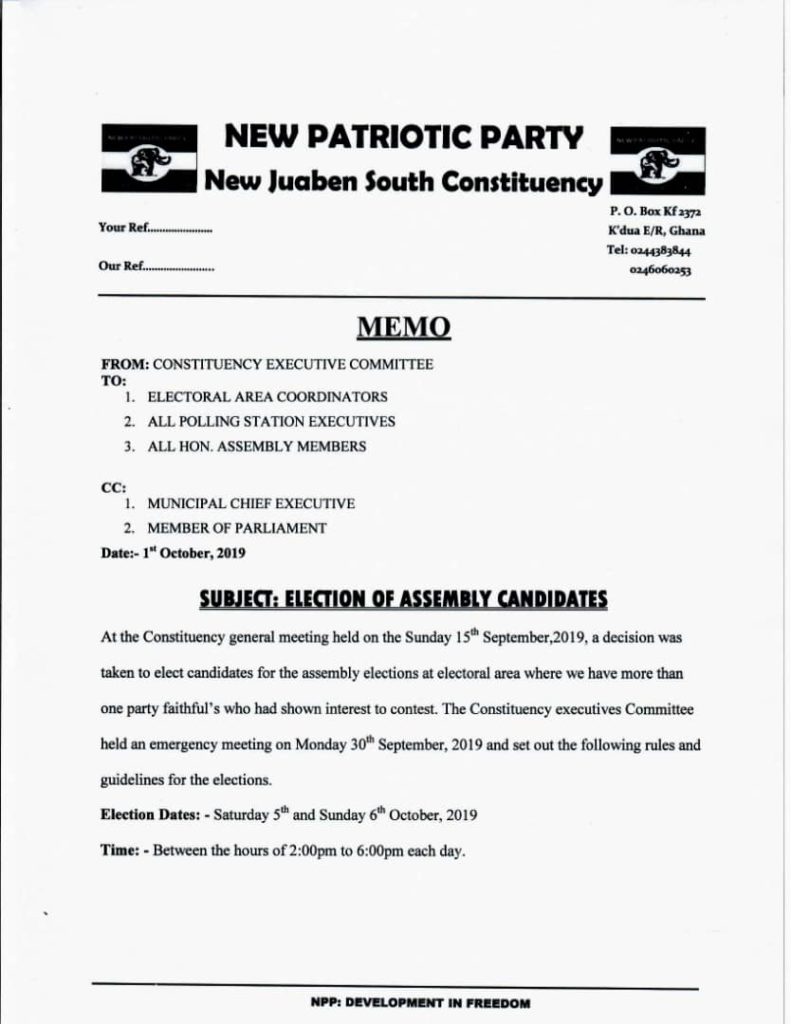 However, there is widespread suspicion that, this decision by the constituency executives was taken ostensibly to clear Assembly Members believed to associate with the incumbent Member of Parliament, Dr.Mark Asibe Yeboah and be replaced by affiliates of the Chief Executive Officer of Ghana Free Zones Authority, Michael Okyere Baafi who has been working underground to unseat the MP in the yet to be held Constituency Primaries of the Party.

Power struggle continue to fester between the two political factions within the party which has been evidence throughout its internal elections.

But according to the party, the decision was to avoid multiplicity of candidates from the same party in an electoral area to ensure that, the party consolidates and improves performance in winning more electoral areas.

The Electoral Commission will conduct district level elections for assembly members and a referendum on the election of Metropolitan, Municipal and District Chief Executives (MMDCEs) in December.

The Government in February 2019 laid the Bill to amend the Constitution to allow for the election of MMDCEs.