Inadequate infrastructure at Kwabeng Anglican Senior High Technical School in the Atewa West District of the Eastern region has forced students to study and dine under trees and canopies while boarding students perch in very congested dormitories.

Kwabeng Anglican Senior High Technical School established in 1984 by the Koforidua Diocese of the Anglican Church was absorbed into the public education system in 1993.

The School has since operated from its old facility without any major infrastructural expansion though the previous NDC government initiated a dinning Hall facility project and a One -Storey Classroom block, all yet to be completed.

The introduction of the Free Senior High School Policy has led to increase in the school’s population to about 1,500 worsening the infrastructural challenges. 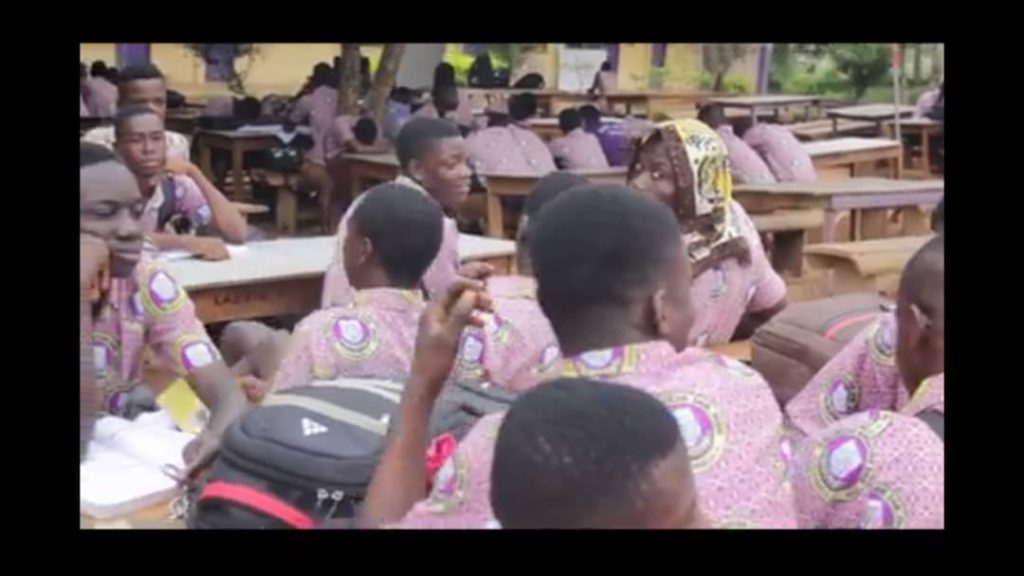 Workers were, however, seen working earnestly on the one storey -classroom block which is 90% complete hoping it amelioriates the infrastructure deficit which has forced Form Two (2) students to learn under trees and canopies.

“As for the Form two students when the Form Ones came we have given our classrooms to them to learn that is why we are sitting under trees, Canopies in the open. These are the classes from your left two home econs, here is form 2 -Technical, the other side is Agric class, and where I am here is Business,” a Student explained pointing to the various classes.

Unavailability of text and exercise books for first year students and congestion at the dormitory is also major worry to students.

“There are a lot of challenges.I am from Madina-Abokobi coming to Kwabeng a place i don’t know.Actually facilities here are not all that perfect.I am perching with my School Mother in a congested dormitory.I have no text books,no exercise book to write they said the President will provide but yet to so we are waiting”.

The challenges of the School were noticed when Manager of Ready Oil Company-Samuel Owusu Manu presented 700 pieces of a book he authored tittled “Refuse to Remain There” to the Students.

Instructively, Kwabeng Anglican Senior High Technical School has no Bus neither a vehicle for administrative work hence the school depends on commercial vehicles for its activities and even when sick students need emergency medical care.

Starr News sighted many letters written to the District Assembly, the Member of Parliament for the area, Kwasi Amoako Atta and the Ghana Education Service on the absent of Vehicle in the school but the situation remains unchanged.

Management of the School refused to speak to Starr New.

A Look at How Social & Mobile Gaming Increase Sales

Okonam Residents To Boycott 2020 Elections Over Schools Under Trees