Ghanaian musician and social commentator, Kwame Asare Obeng, popularly called A-Plus has doubted the innocence of some leading members of the ruling New Patriotic Party (NPP) in some national issues.

According to him, nephew of the President, who is also the founder of the Danquah Institute, Gabby Otchere-Darko confided in him some time ago that he, together with some bigwigs in the party will be arrested and prosecuted if John Dramani Mahama ever returns to the presidency.

Kwame A-Plus made this allegation without any substantive evidence in a post on his verified Facebook page.

Another name he mentioned aside Mr Otchere-Darko’s was Philip Ayensu who was widely known as the Board Chairman of the defunct Power Distribution Services (PDS) Ghana Limited.

Per A-Plus’ narration, Gabby Otchere-Darko informed him that he (Gabby) had told Philip Ayensu about their imminent arrest if they lose the helm of affairs to the John Mahama-led NDC.

He further wondered why Mr Otchere Darko will be scared of any arrest whatsoever if he or other members of the party were innocent of the recent string of allegations against them.

Parts of his post read; “You are there shouting 4more4Nana when Gabby Otchere-Darko himself told me he has told Philip Ayensu that if NDC comes to power they will arrest he Gabby first and Philip Ayensu second so when he gets money he should use it to sponsor NPP to stay in power.”

“If they have not done anything bad why are they scared of being arrested in future???? You see this table I’m shaking? It’s a trap. Don’t fall into it,” he added.

He also labelled them as “ungrateful, disrespectful, arrogant, dishonest people”.

In 2019, Gabby Otchere-Darko together with Philip Ayensu were allegedly named in a controversial PDS scandal. It was reported that some cronies of the ruling government were scheming to distribute shares of the PDS deal amongst themselves.

Subsequently, in 2020, Gabby Asare Otchere-Darko was again named a main player in the Agyapa Royalties deal. An accusation which he has vehemently denied since the news broke. 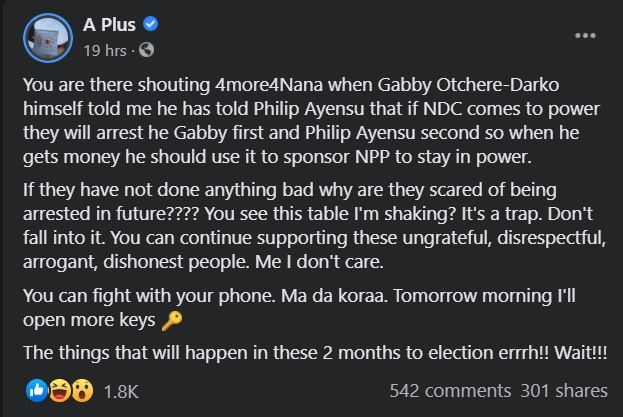 Why Rev. Owusu Bempah was arrested

If you can’t do the job, leave – SIGA boss tells CEOs of State-owned Enterprises

Why Rev. Owusu Bempah was arrested

If you can’t do the job, leave – SIGA boss tells CEOs of State-owned Enterprises