Thousands of people have joined anti-racism demonstrations across the UK.

The protests, sparked by the death of George Floyd in the US, were held in cities including London, Manchester, Cardiff, Leicester and Sheffield.

In London, protesters knelt for a minute’s silence before chanting “no justice, no peace” and “black lives matter”.

The majority of the day’s protests were peaceful but in the evening there were disturbances outside Downing Street.

BBC home affairs correspondent Tom Symonds said the protest was largely over when missiles and fireworks were thrown at a police line.

Police horses were used to regain control, but one horse galloped ahead and its rider fell to the ground after hitting her head on a traffic light. Her injuries are not life-threatening, the Metropolitan Police said.

Fourteen people were arrested and 10 officers were injured after a smaller group became “angry and intent on violence”, the force added. 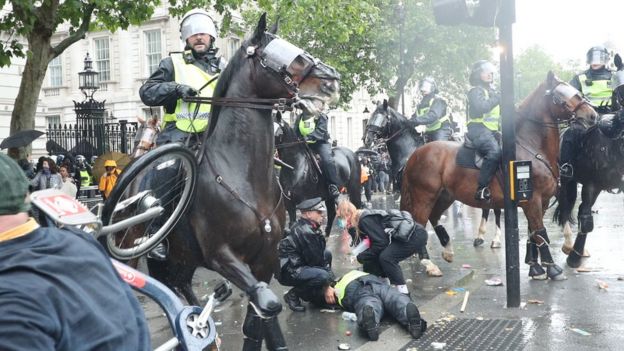 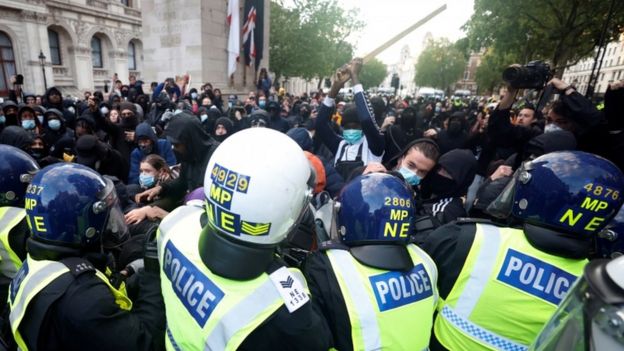 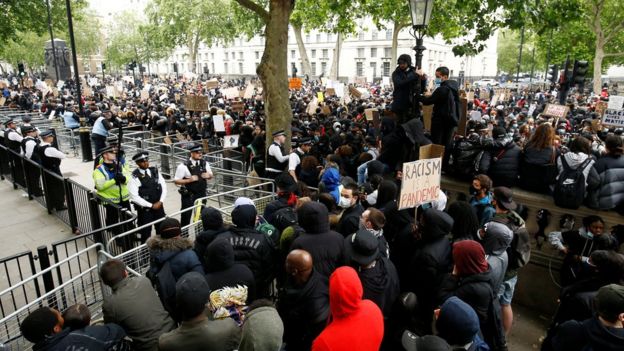 Image copyrightREUTERS Image captionBut demonstrations were largely peacefulIn a tweet, Mayor of London Sadiq Khan told the protesters “I stand with you and I share your anger and your pain” and said the small minority of people who became violent “let down this important cause”.

The protests went ahead despite officials advising against mass gatherings due to coronavirus.

Home Secretary Priti Patel said the social distancing advice was “for the safety of all of us”, while Met Police Commissioner Dame Cressida Dick said the protests were “unlawful”.

Are you allowed to protest during lockdown? Thousands attend George Floyd protests in Manchester Why the US protests resonate in the UKThousands of people gathered in the capital, the majority donning face coverings and many with gloves.

Some held signs made reference to coronavirus, including one which read: “There is a virus greater than Covid-19 and it’s called racism”.

Meanwhile, in Northern Ireland, police said they had issued “a significant number” of fines given the dangers of crowds in the pandemic and organisers would now be reported to the Public Prosecution Service with a view to prosecution.

Protests began in the US after a video emerged of Mr Floyd, a 46-year-old black man, being arrested by four officers on 25 May in Minneapolis.

Videos showed Mr Floyd, who was unarmed and in handcuffs, dying after a white policeman knelt on his neck for nearly nine minutes. The footage – seen all around the world – showed him gasping that he could not breathe.

An officer has been charged with murder while three of his colleagues stand accused of aiding and abetting the killing. 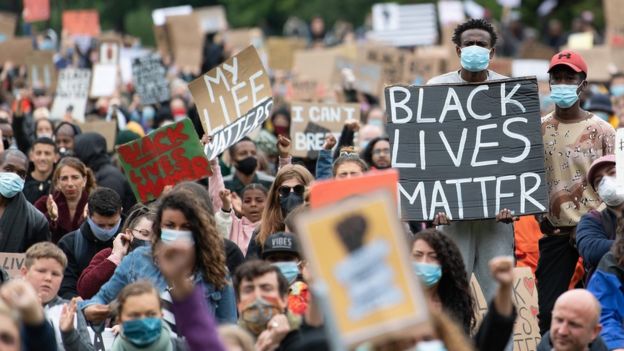 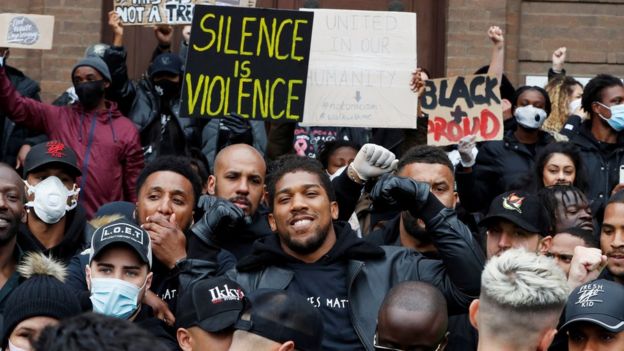 Image copyrightREUTERS Image captionBoxer Anthony Joshua joined protesters in Watford, HertfordshireAt a protest in his hometown of Watford, Britain’s world heavyweight champion boxer Anthony Joshua told the crowds: “We can no longer sit back and remain silent on this senseless, unlawful killing and sly racism on another human being.”

In central London, protesters dropped to one knee and raised their fists in the air outside the US embassy amid chants of “silence is violence” and “colour is not a crime”.

Sarah Law, a 27-year-old train manager, said: “I don’t want my future children to experience what I have. It’s time for us all to unite together regardless of our race and stand up for what is right.”

O’Neall Rawle, a 27-year-old teacher from Leicester, said he was protesting because he was “exhausted of being treated as a second class citizen” and “to hopefully spark some change”.

Meanwhile, in Glasgow, anti-racism campaigners renamed streets that have links to the slave trade, replacing street signs with the names of enslaved Africans, black activists and victims of police brutality. Demonstrations are scheduled in Glasgow, Edinburgh and Aberdeen on Sunday. 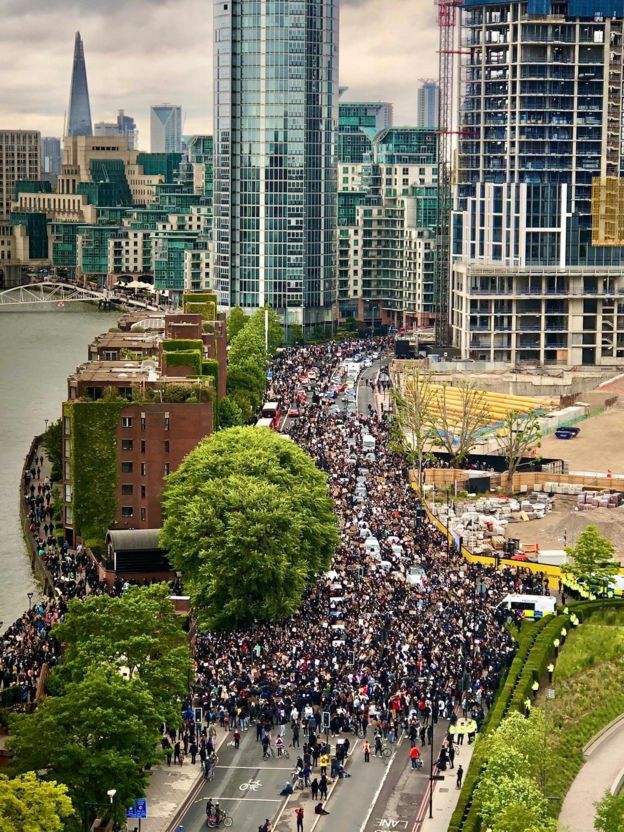 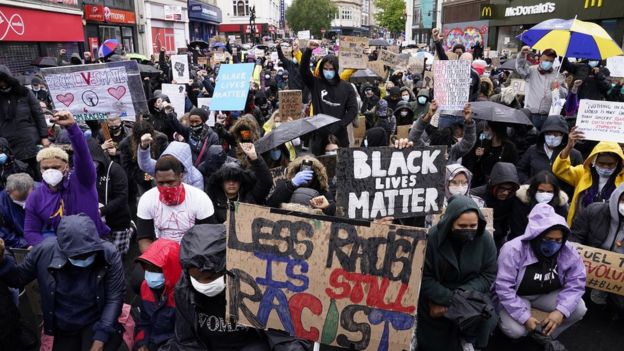 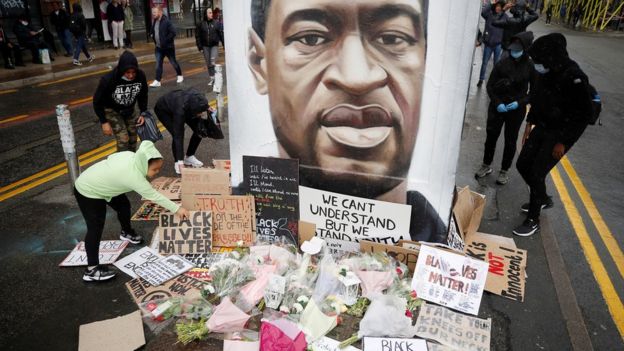 Image copyrightREUTERS Image captionPeople left flowers and placards at a mural of George Floyd in ManchesterIn Manchester about 15,000 protesters gathered at Piccadilly Gardens in the city centre, clapping in unison and holding placards bearing the initials BLM.

Elsewhere, several hundred people marched in Newcastle, while many more took part in an online protest organised in the north-east of England.

More protests took place across Europe on Saturday and huge rallies are taking place in major cities across the US.

UAE To Launch Spacecraft To Moon In 2024, Tweets PM