Pupils of Okonam M/A Junior High School in the Suhum Municipality have been compelled to study under trees after the collapse of their ramshackle classroom block built over eighty(80) years ago.

A three-unit GETFUND Classroom block, a classroom for Kindergarten pupils, and Teachers Bungalow project started by the previous government have, however, been abandoned.

Angry residents in the community say they will block Political parties from campaigning in the area and subsequently boycott the 2020 Presidential and Parliamentary elections if the projects are not completed.

Okonam M/A Basic School is the only school serving children within and outside the community.

It was established in 1926 through communal labour by residents in their quest to provide access to formal education for their children.

The school has since been absorbed by the government.

Until a few years ago, both Primary and JHS still operated in deplorable classrooms. While the Primary School pupils are currently fortunate to study in a new classroom block, the JHS pupils are still struggling to have convenient classrooms

Teaching and learning are disrupted anytime it rains. Domestic animals including dogs, sheep and goats also invade the classrooms under trees. 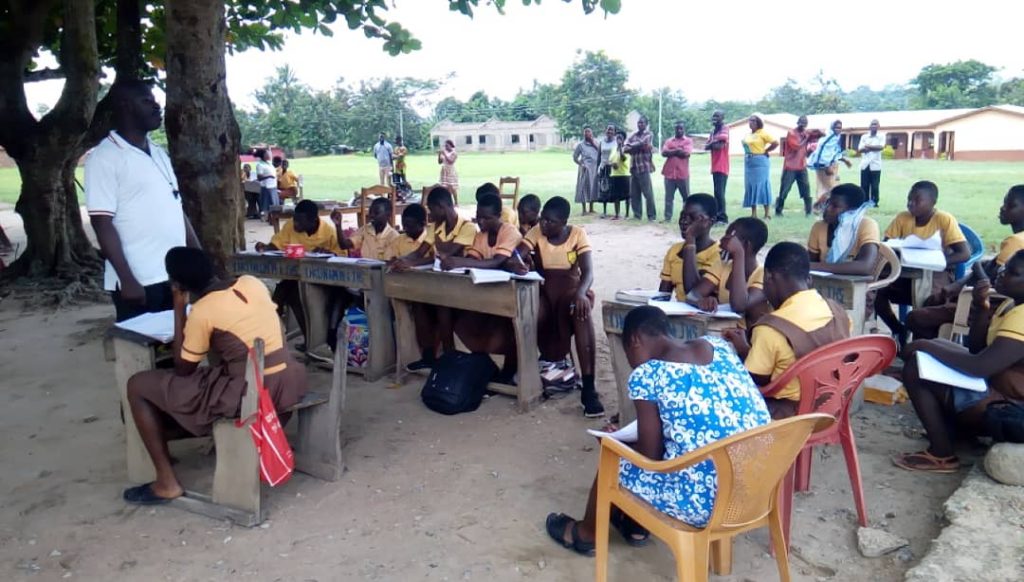 “We close whenever it is about to rain because we don’t have classrooms. We study under trees. Even desks to sit on is another problem we are facing here,” a pupil lamented.

According to Abusuapanyin Kofi Teinor, an opinion leader, several efforts made to get the Project completed have failed. He said the community has resolved not to take part in 2020 election if the project is not completed.

“As if we are not part of Ghana. Since the collapse of the JHS structure we have made efforts to get the Suhum Municipal Assembly complete the abandoned GETFund projects in the School for the pupils but to no avail.”

He added ” it has been raining here every blessed day for the past three weeks so teaching and learning have not been effective. If the projects are not completed a month before December 2020, no political party will be allowed to campaign here. We will boycott the elections. The community is for us, not the government. Our children deserve better because they write the same exams with those in cities.”

Some parents expressed their anger about the situation. “there is hardship all over yet when we manage to buy books for our children it damages within few days because of rains that chase them out every day. We in the rural areas have been neglected by government ”

Okonam M/A Junior High School lacks Computers making the teaching of ICT a herculean task for teachers. Pupils inability to access the facility for Practicals has been affecting their performances in the subject.

Prospectus Ghana Launched As One Stop Shop For All School Items