Former President Jerry John Rawlings has bemoaned the growing lack of patriotism in the country, describing it as ‘Ghana’s biggest challenge’, adding ‘our patriotic sense and responsibility is lost’.

He made reference to the illegal mining (galamsey) menace in the country as a testament of the lack of patriotism by some Ghanaians.

“Entire rivers have been destroyed by the senseless and unbridled abuse caused by greed, unpatriotic attitudes and the failure of mining supervisory agencies such as the Environmental Protection Agency (EPA) and the security agencies to enforce the laws.

“The problem of this brazen abuse is collective.

There is no doubt that institutions have been weak, and the commitment of successive governments even weaker because of shallow political will. Local people and traditional leaders are also complicit.

“Until the average Ghanaian recognises the need to show responsibility, first to himself, family and environment, we will continue to experience economic, social and political poverty,” the former President said.

Flt Lt (retd) Rawlings was speaking at the 75th anniversary platinum awards ceremony of the Ghana Mine Workers Union (GMWU) in Accra last Friday, where he was honoured together with Ghana’s First President, Dr Kwame Nkrumah, and other members of GMWU for their positive contributions towards the development of the mining sector in Ghana.

The former President called on members of the GMWU to be agents of change.

“Let this 75th anniversary impact society in a positive manner. Let the anniversary be an opportunity to perform a deep introspection of what you can do for Ghana and not what Ghana can do for you.

“Let this be a period where many of your anniversary events are not about wining and dining but also an opportunity to deal with the scourge of illegal mining, indiscipline and corruption, which have become more of the norm than the exception”, he added. 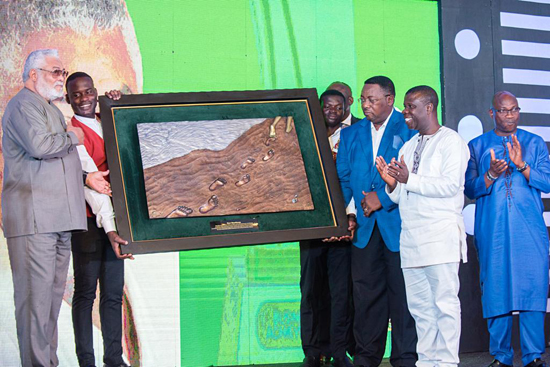 The awards ceremony brought together national officers and former general secretaries of the union, as well as representatives from some sister trade unions.

It was a night of awards and merrymaking as members of the GMWU sang and danced to tunes such as James Varrick Armaah’s “Oye” in recognition of God’s guidance and favour on the organisation in the past 75 years.

The General-Secretary of the Ghana Mine Workers Union, Mr Prince William Ankrah, paid tribute to all members of the union for their contributions to the growth and development of the mining sector.

He also commended them for their commitment towards the realisation of the vision of the GMWU.

“The mining sector under his leadership received priority attention unrivalled by any under the Economic Recovery Programme in 1983,” he said.

Acording to him, Mr Rawlings’s regime implemented specific sector policy reforms and also promulgated series of laws culminating in the creation of an effective regulatory framework which boosted foreign investments.

In response, former President Rawlings paid glowing tribute to late Mr Paul Victor Obeng and other former appointees and awardees for their role in revitalising the mining sector for national development.

There were also posthumous awards for a former member of the Provisional National Defence Council (PNDC), Mr Ebo Tawiah, and a former General Secretary of the Ghana Mineworkers Union, Mr Dominic Foevie.