US TV star Oprah Winfrey arrived at the wedding looking serene and relaxed.But her demeanour hid the last-minute drama surrounding her choice of outfit.She had realised on Friday morning that the beige dress she had been planning to wear appeared “too white” for a wedding in photographs.Luckily, Stella McCartney came to the rescue to help her avoid making a wedding faux pas in front of millions of viewers.In a video posted on Instagram, she thanked the designer’s team for “working all night long” to make her a new outfit. 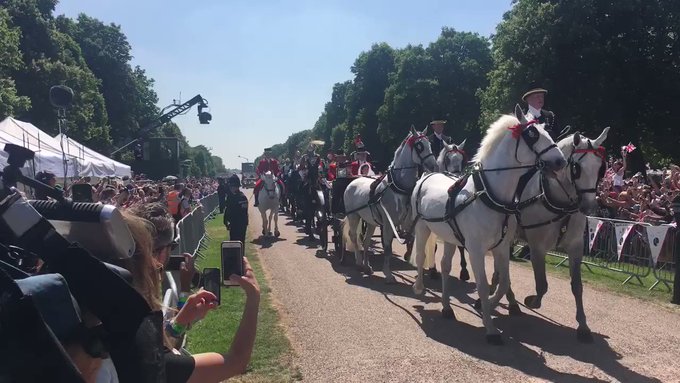 “Oh my God” screams Meghan as her old drama teacher Gigi Perreau manages to catch her eye in the crowd! Two seconds before I said do you think she’d recognise you! She was right! @itv @itvnews

The new Duchess of Sussex couldn’t contain her excitement at spotting a familiar face in the 100,000-strong crowd.Meghan gasped and appeared to say “Oh my god” at seeing her former drama teacher, Gigi Perreau, as her carriage travelled through Windsor.The heart-warming moment was captured and shared by TV weather presenter Alex Beresford.Ms. Perreau, a 1940s film star turned acting coach, beamed after catching her former pupil’s eye.Tennis star Serena Williams changed into a floor length Valentino gown for the evening celebrations – and showed it off on social media.But she later revealed that, underneath her dazzling dress, she had been hiding some comfy friends…She wrote: “Little known fact: I often wear sneakers under my evening gown… I tend to be comfy for long nights.”It’s not the first time the American has worn trainers to a wedding – she wore a pair covered in jewels for her own special day. SOURCE: BBC News

Huawei’s Founder Says The Company Is Well-Prepared For U.S. ‘Battle’