Red Star Belgrade fans stirred controversy after parking an army tank outside their stadium ahead of their Champions League play-off second leg against Swiss side Young Boys.

The tank, a refurbished T-55 purchased from an army depot, was parked outside the stadium as an “attraction”, the Serbian club said on their Facebook page.

However, the move divided fans and drew strong condemnation in neighbouring Croatia, who saw the tank as a symbol of the assault by Serb forces on the city of Vukovar at the start of the Croatian War of Independence in the 1990s.

“They want to play in the Champions League as they celebrate one of the worst crimes,” the newspaper wrote.
Online news site Index.hr also accused Red Star of “displaying a Vukovar tank in front of their stadium”, although neither the club nor its supporters presented it that way.

On their own website, redstarbelgrade.rs, fans said the tank was meant to represent the “machine” of the club, and the nickname of their supporters, who are known as the Northern Army. 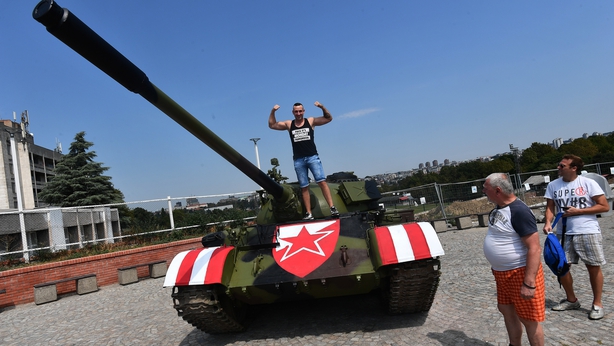 The controversy comes amid already high tensions after a Serb-owned bar in Croatia’s Knin region was attacked by masked men while patrons were watching the first leg between Red Star and Young Boys last week.

The relationship between Croats and the Serb minority in Knin is still tense almost 25 years after the end of the 1991-1995 independence war that separated Croatia from Serbia and the rest of the former Yugoslavia.
The incident involving the tank has also drawn divided reactions in Serbia.

On Facebook, one commenter called Milan Bizic welcomed the “phenomenal response to the attack on Red Star supporters in the Knin region”.

Another user, Milos Stancic, said the act was in “bad taste” and that a “tank has nothing to do with the club”.

Red Star are hoping to secure progress to the Champions League group stage for the second season running after a 2-2 draw in the first leg in Switzerland last week.

Svitolina Hits Form To Storm Into Semis Of WTA Finals