A 42-year-old Florida woman, Sarah Boone, has been arrested on second-degree murder charges following her boyfriend’s death after being zipped in a suitcase for hours.

Upon being arrested, she told detectives she was playing a game of hide-and-seek with her partner Jorge Torrez Jr. on Monday February 24 while drinking alcohol. Boone said they agreed it would be funny if Torrez hopped in a blue suitcase in her home outside Orlando. 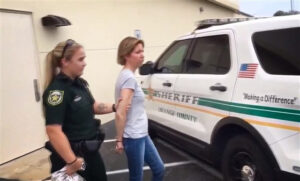 The sheriff’s office however said Boone’s statements have been “inconsistent” as there is a cellphone footage of Torres screaming for help while being taunted by her. She was seen laughing in the video as Torres called out her name, saying he can’t breathe.

The arrest report said Boone replied on the tape, “That’s what you do when you choke me,” and when he said he couldn’t breathe again she said: “That’s on you. Oh, that’s what I feel like when you cheat on me.” She was also heard telling a pleading Torres to “shut the f— up”.

Coronavirus And Oil: Why Crude Has Been Hit Hard